‘Festival-goers were left speechless when the event’s main attraction, the Pyrophone Juggernaut, lit up the night sky with a spectacular musical fire show.’ MELBOURNE LEADER

This is outdoor theatre at its wildest, standing 10m high, the Pyrophone is the largest multi-octave fire organ in the world. Fuelled by fire, this instrument is made entirely from reclaimed metal and recycled car components. Five inspired musicians create a percussive spectacle of heart pulsing rhythms in this epic show, with industrial drums, acoustic bells and spectacular 15m-high flames. This thrilling outdoor performance has been the highlight of the Sydney International Arts Festival and the Melbourne Ignite Festival.

“A percussive spectacle of ‘Orwellian’ proportions, where the energetic performances of the artists pulse hand in hand with the awe inspiring furnace driven melodies. You got to hear it yourself to believe it.” ODDSTRUMENT.COM 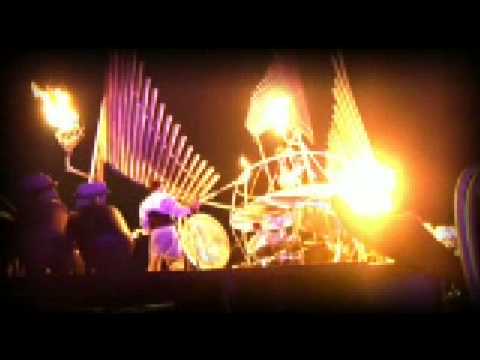